Crime And Other Community Indicators 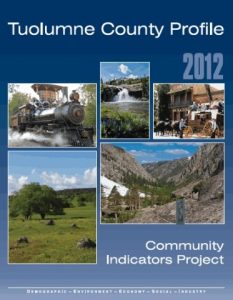 Sonora, CA – In the series that looks at the Tuolumne County Profile 2012 Community Indicators Project, our focus is on a variety of indicators including crime.

The Sonora Area Foundation contracted with the Center for Economic Development at California State University, Chico to create this study. It aids the community in assessing the needs of Tuolumne County.

Crime rates have been generally falling in Tuolumne County and California. Crime spiked in 2003 and 2004 but fell to levels below 2000 by 2009. More current data was not in the report.

The median household income rose from 2002 to 2008, peaking at $49,295. With the recession, income declined to $46,295 by 2010 the most recent year for information in the report. Poverty rates were at 14.2% for the County. The percentage of persons in Tuolumne County below the poverty line is usually less than California, by and average of 1.1%.

In addition to the crime rates, it was also noted that more of the Tuolumne County workforce travels away from home to work.

Tuolumne County’s overall workforce commuting into the county has decreased but the number going out has nearly tripled in the past 7 years. 54% of the total workforce does travel out of the county to work. Highway 108 West of Mono Way had seen a 9.7% decline in traffic volume ans 33% decrease in volume East of Soulsbyville road. Highway Highway 108 West of South Junction with Highway 49 has seen an increase but the largest increase in traffic volume was at the Mariposa county line on Highway 120. Data was collected from eight highway areas from 2006 and 2010. The information was reported as an environmental indicator because of pollution from the traffic. Tuolumne’s air and water were better or comparable to the rest of the state.