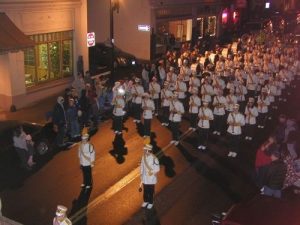 Sonora, CA — It’s the 30th Anniversary of the Golden Regiment. To celebrate not only the anniversary, but homecoming on October 12th they’re having a dinner and reception from 4 P.M.to 6 P.M. in the Sonora High School Band Room. The fun is open to all Golden Regiment members and alumni including their families and friends.


A Golden Regiment Band Graduate herself and Current Band teacher Yvonne Denton says “We have a big surprise. We have a special guest, Golden Regiment founder and Band Director from 1983 to 2007, Pat Sieben.”

The band is also taking orders for its commemorative 30th anniversary T-shirt which costs $10.