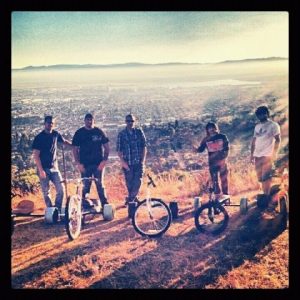 Groveland, CA – A group is claiming responsibility for creating all the uproar surrounding Old Priest Grade this past Monday. They caused a scene for using so-called “coasting devices” to soar down the steep and winding terrain. In fact, it even was a topic of discussion at this week’s Tuolumne County Board of Supervisors meeting when a county official brought to the Board’s attention that the coasters may be breaking county laws.


Now, the group Drift Trike Mafia out of Oakdale, is taking responsibility for the incident, but says they weren’t on skateboards. They say they were riding “trikes.” Custom built non-motorized bikes with brakes, a rubber front tire, and PVC pipe covering the back tires. It is not the first time they have taken to Old Priest Grade, as you can see from a video they shot this past June. Click here to view. It has received over 350,000 views on YouTube.

Watching the video, Drift Trike Mafia’s Martin Sandoval agrees that it does look very unsafe saying, “I completely understand, but it just depends on your control on your trike.” When asked about getting dangerously close to on-coming traffic, Sandoval says, “That’s the fun part about it. That’s part of the adrenalin rush about it.” He adds “We have never had an accident with a car.” How about a trike crash? Sandoval replies. “Yes, I just had an accident on Monday on Old Priest Grade. I hit a guardrail going about 25 mph.” Sandoval adds he was wearing safety gear so he wasn’t hurt.

Sonora CHP Sgt. Scott Clamp says “Whether on a skateboard or bicycle or other coasting devise there is definitely a safety issue on that road. There’s no shoulder, or very limited shoulder, in the area, and there’s blind curves for vehicular traffic that can’t see around the curve. So yes, definitely a big safety issue.” However, Clamp says “Bicyclist and skateboarders can legally use that road as long as there are no right-of-way violations occurring.”

Sgt. Clamp notes that the investigation is ongoing. County officials have contended that closing down Old Priest Grade is a violation of a local ordinance, however, Sandoval contends that this did not occur.

Sandoval adds that he plans to put out a new video tomorrow which will include footage from Monday’s Old Priest Grade run. He says Old Priest Grade isn’t the only place they run their trikes. They also hit the streets in San Francisco, Oakland and Oakdale.

And no, they are not connected with the skateboarder that was filmed sailing down the grade on an earlier occasion.

Click here for a map of Old Priest Grade.