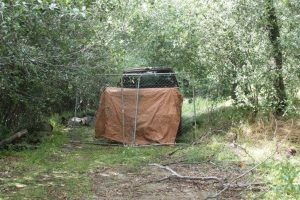 Tuolumne, CA – A body has been discovered outside of Tuolumne that could be a missing Jamestown man and is being viewed by sheriff’s detectives as a “suspicious death.”

On Wednesday, Tuolumne County Sheriff’s officials were seeking the public’s help to find 44-year-old Jeremy Allen, who was last seen in April, as reported here. Investigators also released pictures of Allen and his truck, a 2005 maroon Ford F150.

Sgt. Andrea Benson reveals detectives were notified that same day of similar looking pickup parked behind a fence and tarp in the area of Fir Drive and Mountain View Road in Sonora, which she says was confirmed to be Allen’s truck.  Another lead led investigators to seven miles outside of Tuolumne to a forest road off of Buchanan Mine Road, according to Sgt. Benson, who relays it was there during a search of the woods that detectives
found a body believed to be Allen’s. She adds that positive identification and cause of death will be determined by an autopsy.

As this is an ongoing investigation, anyone with information related to this case is asked to contact the Tuolumne County Sheriff’s Investigation Division at 209-694-2900.