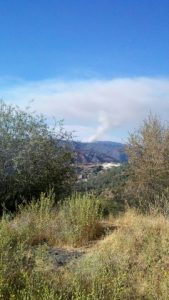 Firefighters will remain on scene throughout the day at two major fires burning in the Mother Lode.

The latest estimate is that the Penn Fire, which is burning near Pennsylvania Gulch and Skunk Road in Murphys, is just under 200 acres and around 15 percent contained. Information Officer Lisa Williams says over 200 firefighters from CAL Fire, and surrounding agencies, are assigned to the fire. It reportedly started from a residence and spread to nearby vegetation. To view a map of the area, click here.

One unidentified CAL Fire crew member suffered major injuries yesterday afternoon when an engine was responding to the blaze. It was struck by a civilian vehicle, and the firefighter had to be airlifted to Memorial Medical Center in Modesto for treatment.

Also, there is a 100 acre fire near Graham Ranch Road in Groveland. The fire is five percent contained and no homes are considered in danger. To see a map of the region, click here.

Both fires are being attacked from both the air and ground.

A special thanks to community members Kate Shanley, Dale Hines, Amy Monson and Christina Wilkinson who sent in photos or provided eye witness accounts from the scene.