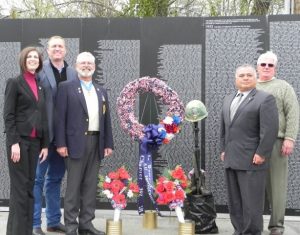 Washington, DC — The Veteran Skills to Jobs Act introduced by U.S. Representative Jeff Denham was signed into law today by President Obama. Denham says the bill is to make it easier for veterans to find jobs using skills acquired through military training. Specifically the bill will streamline the federal certification process to make it easier for veterans to use skills acquired in military for jobs at home.

Denham says, “The federal government has invested in our service members and should do everything it can to ensure that they can put their skills to work. I’m proud to have worked with my colleagues in the House and Senate on both sides of the aisle to uphold our commitment to our veterans and I thank President Obama for signing this important piece of legislation into law to get thousands of veterans back to work.”

“I would also like to thank in particular the American Legion for their continued support and dedication to moving this legislation forward, as well as the many other Veteran Service Organizations who supported our efforts and made passage of this bill a priority.”

Denham’s legislation was signed by the President during his visit to the Veterans of Foreign Wars annual convention in Reno, Nevada earlier today.