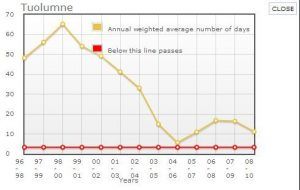 A report put out today by the American Lung Association states, “If you live in Tuolumne County, the air you breathe may put your health at risk.”

Tuolumne and Calaveras both received a ‘F’ grade because their Ozone was at a weighted average of 11.2. San Francisco received an ‘A’ grade for its 0.0, anything over 3.2 lowered the grade, with 35 out of 58 California counties receiving an F. Most coastal counties received an A.

The photos with this story are charts that show the change in High Ozone Days since 1996. According to the study, since 1996, Tuolumne had 37.1 fewer days of poor air quality this year. Calaveras was listed as having 27.8 fewer days.

Also noted in the study was how many Air Quality Index days were Orange (unhealthy for sensitive groups), Red (unhealthy), or Purple (very unhealthy).

Tuolumne County had 29 Orange Days, 3 Red and 3 Purple. There was no 24 hour or annual particle pollution monitoring available in the county.

The Lung Association identified several groups that are at risk for health related problems due to poor air quality. These include; those over 65, and under 18, as well as those who have Asthma, Emphysema, Chronic Bronchitis, Diabetes or Heart Disease. They also noted that people who work or exercise outside face increased risk from the effects of air pollution.

The Study provided the following recommendations to improve a county’s grade; “Drive less. Use less electricity. Support measures in your community that can cut air pollution. Tell your local and state officials to take steps to clean up air pollution. Send a message to your Senators to tell them we need them to support cleaner, healthier air and to oppose measures to block or delay the cleanup of coal-fired power plants.”