Libraries Versus The Internet 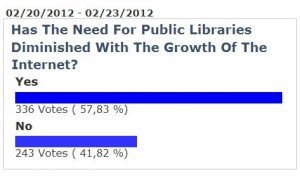 Sonora, CA — A three day informal myMotherLode poll this week asked, “Has the need for public libraries diminished with the growth of the internet?” The majority said it has diminished. 57% answered Yes, and 41% voted No. On our facebook post Connie responded to “Is the internet hurting libraries?” with, “Not! See ebooks free at your local library, plus art, movies, book club, sales and help.” She added, “Anyone of the 25,000 cardholders would [support it].”

Opposing opinions were reflected in the recent “On The Street” segment by News Director, B.J. Hansen. “On The Street” is a weekly vignette that airs on 1450 KVML, Star 92.7 and 93.5 KKBN. Some were in support of libraries but felt that the internet was more ubiquitous and convenient than going to a library.

To hear the segment you can visit the Multimedia On the Street section.