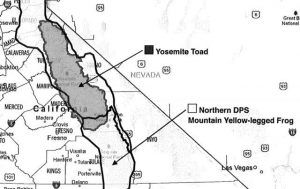 Sonora, CA — The Tuolumne County Board of Supervisors voted unanimously to send a strongly worded letter to the U.S. Fish and Wildlife Agency regarding the endangered status and habitat protection for two local species.

The Sierra Nevada Yellow-Legged Frog and the Yosemite Toad are proposed to be protected by U.S. Fish and Wildlife Agency as Endangered Species. Deputy County Administrator Daniel Richardson submitted a draft of a letter to the Board for approval, noting that it had not had time to go through the Natural Resources Committee, but needed immediate approval to meet a June 24 comment deadline on the report.

According to the proposed letter 1,431,040 acres or 35% of Tuolumne County will be designated as critical habitat for the two endangered species. Maps indicate that land in Yosemite, the Emigrant Wilderness, the Stanislaus National Forest and 176 acres of private land are in the proposed protected area. Within the boundaries of the designated frog/toad protected habitat activities such as: grazing, trout stocking, logging, mining, hiking, and rafting could be forbidden. The letter was approved to express the large impact it would have on the local economy.

Supervisor Karl Rodefer says, “Basically this would put the U.S. Forest service out of service in California because Fish and Wildlife would own all the Forest Service lands.”

Several other counties will be affected as well, Amador and El Dorado counties have already submitted letters in protest. District One Supervisor Sherri Brennan noted a five year Stanislaus National Forest study was not mentioned in the lengthy report. Brennan and Supervisor Randy Hanvelt agreed that Tuolumne County’s letter should specifically mention the study. For more about the study view the news story Yosemite Toad Decline.

In addition to clarification about the impact the endangered species designation will have on activities in the habitat areas, and the choice and science behind defining local habitat boundaries, the length of time to comment was also disputed. The U.S. Fish and Wildlife Agency report was released in April and gave 41 business days for comment. The deadline is June 24, 2013. The April news story about the U.S. Fish and Wildlife Agency’s report is titled “Mother Lode Counties “Critical Habitat” and is here.

Tuolumne County Supervisor Randy Hanvelt says he talked with U.S. Representative Tom McClintock’s office this morning who told him with the support of the counties he will demand a congressional hearing on the issue.

U.S. Representative Tom McClintock has already submitted a request for a 90 day extension of the comment period to the Director of the U.S. Fish and Wildlife Service Daniel Ashe. The full letter is in his blog here.