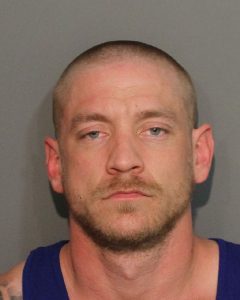 Angels Camp, CA – After being pulled over for vehicle code violations, a driver took off and while winding his way around an Angels Camp neighborhood drove through a block party with children playing in the street.

What was also unsettling, according to Angels Camp Police, is that the motorists had a child strapped into a car seat in the back of his SUV. With lights flashing and siren blaring on his patrol vehicle an officer attempted an early evening traffic stop at the Gardner Lane and Holly Street intersection recently. The driver, 32-year-old Dustin Pruden of Angels Camp, refused to pull over. Moving through the neighborhood at about 10-15 mph, he even drove through an outdoor party where children and adults were celebrating in the roadway. After driving about a mile, turning from Gardner Lane onto Casey Street and then Holly Street, Pruden finally stopped.

A records check showed that Pruden was wanted on three outstanding misdemeanor Calaveras County warrants, which allowed for a search of the vehicle. Police spokesperson Teresa Johnson details, “Officers located stolen property in the vehicle which included: tools, paperwork, photos, checks, and bank cards. The property was seized and is being returned to the rightful owners. Pruden was arrested.  While headed to the jail, he attempted to destroy a small plastic baggie containing methamphetamine in the backseat of the patrol vehicle.”

It was determined that an adult in the front passenger seat of Pruden’s SUV was the parent of the small child in the back seat. The kid was released to that person at the scene.