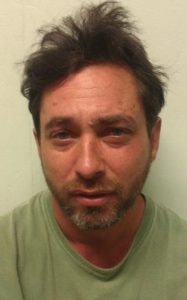 Sonora, CA — Suspicious driving results in a fifth DUI charge for a local man. The initial stop was made by a Tuolumne County Sheriff’s deputy Monday night just before 10p.m. The deputy pulled over a 1996 Buick Skylark on Mono Way near Greenley Road for going only 10 MPH and swerving in and out of traffic. The deputy reported he could smell a strong odor of alcohol on the driver’s breath and handed the stop over to Sonora Police.

The driver 43 year-old Jeffery Spiteri and his passenger 47 year-old David Bryan, both known as transients to police were taken into custody. Police say Spiteri failed a field sobriety test and preliminary alcohol test showed his blood alcohol level to be .26, more than three times the legal limit. They say Bryan had also been drinking and had an elevated blood alcohol level as well. Officers did a records check on Spiteri and found he had four prior DUI convictions within the last ten years, the most recent two in 2007. Also, Bryan was on probation for theft.