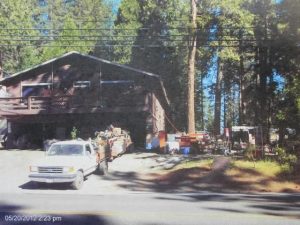 Tuolumne County is requiring a Mi Wuk Village property owner pay several thousands of dollars as his structure is out of compliance and a health risk.

The four unit apartment building is located at 24510 Highway 108. The abatement action was completed last May, and cost the county $7,531.54. Around that time, the structure was boarded up and the occupants were forced to relocate. As a county policy, the abatement actions were reviewed before the Tuolumne County Board of Supervisors. It was noted yesterday that the property owner, listed as Daniel Alonzo Trust, has not appealed the abatement, nor submitted a payment. The next step will be the county placing a lien on the property.

The county says the property owner was given notices that repairs needed to be completed, before taking the abatement action. The property was inspected in May of 2011 to see if an ongoing solid waste violation was resolved. The inspector instead found that the condition of the property had worsened. The garage was overflowing with garbage, and there was a rodent infestation. It was later discovered that there was a lack of required heating, use of extension cords as permanent wiring, a lack of hot water, broken windows in the three of the units, a damaged subpanel in the laundry room, deteriorated stairway, and an accumulation of animal waste.

The property was considered to be an eyesore by some. After the tenants vacated the property, 11 members of the Mi Wuk Village community helped the county clean up the property and assist with the abatement orders.