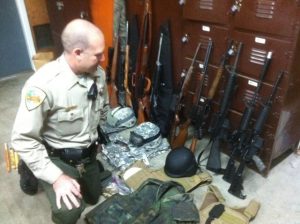 Sacramento, CA — The state Senate has approved a bill authorizing more money for a California program that seizes guns from people who are not allowed to have them. The bill approved today gives $24 million to the state Department of Justice’s Armed and Prohibited Persons Program, which is the only one of its kind in the nation.

According to the Associated Press, Thursday’s 31-0 vote, which included support from eight Republicans, sent SB140 to California’s Assembly.

Gun ownership is prohibited for people convicted of a felony or a violent misdemeanor, who are subject to a domestic violence restraining order or who are determined to be mentally unstable.

The department has confiscated more than 10,000 weapons under the program since 2006 but has a backlog of nearly 20,000 people because it has too few agents to go after the weapons.