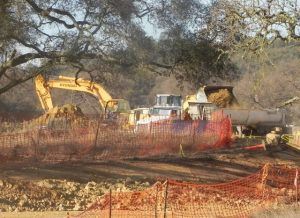 
Sheriff Gary Kuntz says, “They hit some real hard type bedrock. I was informed that when they tested the soil this didn’t show up. It’s going to take extra time, energy and different equipment to get down through this bedrock. Also, there is some fire damper work that needs to be put in so if there is a fire in the facility, rather than seeping through the whole building, the smoke goes out through these dampers. That’s two unexpected costs that we weren’t anticipating.”

Kuntz says the dampers were apparently an oversight by the architect. However, he says these costs will be covered by the contingency budget that is in place for problems just like these. Kuntz says the project is about 22 days behind schedule, but he says contractors have assured him they will meet the July deadline to have the jail built.