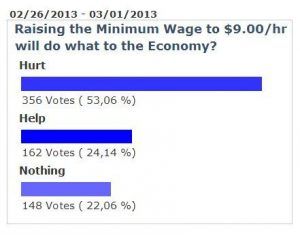 President Obama mentioned raising the federal minimum wage from $7.25 to $9 an hour in his State of the Union Address. It was also the topic of his Monday Newsmaker of the Day story on February 18th here.

It was similar to a recent “On The Street” segment conducted by reporter Tracey Petersen. “On The Street” is a weekly vignette that airs on 1450 KVML, Star 92.7 and 93.5 KKBN and can be heard here.

A letter to the editor submitted by Ashley says “Employers will be forced to lay people off, stop hiring all together or raise prices on their products.” Asking “If prices are raised, tell me, what good will the hike in minimum wage do?” The full Letter to the Editor is here.

Local business owners were contacted in 2006 about an increase in California’s minimum wage. There were mixed reactions, the news story was “Minimum Wage Increase Bad For Sonora Small Businesses”.

In July 2010 Former Governor Schwarzenegger ordered 200,000 state employees have their salary dropped to the federal minimum wage. California’s minimum wage was increased to $8.00/hr in 2008.