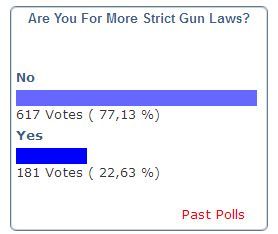 This weeks informal myMotherLode.com poll question about gun laws was similar to a recent “On The Street” segment conducted by reporter Tracey Petersen. “On The Street” is a weekly vignette that airs on 1450 KVML, Star 92.7 and 93.5 KKBN and is posted here.

The myMotherLode.com poll question was: Are You For More Strict Gun Laws? Seventy-seven percent said No and 22 percent said Yes.

In the past month, eight gun control related articles out of over 200 articles that were posted, have an impressive combined comment count of 389.

Many commenters shared their opinion regarding recent tragedies and the second amendment. There was certainly contention and exasperation on both sides of the debate. Our appreciation to all for keeping the conversation civil and congratulations to new commenters who made the effort to speak out.

Also noted is that the eight gun news stories were far from the most viewed news stories on myMotherLode.com. With recent tragedies and drug busts viewed by concerned readers across the Mother Lode. The most popular gun news story: Sheriff Mele: Dont Pass Unnecessary Gun Laws was the 10th most popular news story of the past 30 days.