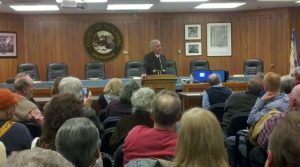 
Jerry Cadagan of Sonora asked, “Would you give us an educated guess on how many actual federal taxpayer dollars will ultimately be spent on Governor Brown’s Twin Peripheral Tunnels Delta Project?”

Congressman McClintock responded that he didn’t know that dollar amount but said, “I’ve taken a strong stand in Washington, no additional conveyance without additional storage. This business of sucking this region dry of water without producing additional water supplies for this region is an absolute outrage. All that does is transfer a water shortage from Southern California to Northern California and by God that’s not going to happen.”

That response brought big applause from the crowd including Tuolumne Utilities District General Manager Pete Kampa who liked what he heard. “There is really not a lot of consideration going on about what the impacts are on the communities up stream. That is a real concern, so the Congressman has the right ideas. We fully support his actions to do a little check on the state water board and make sure that they are functioning in a manner that represents the entire state and not just where the population is.”

Other water questions included water rights, availability, sewer water leakage lawsuits and whether those who benefit from the water should be the ones paying for it. To the latter McClintock responded, “We’ve gone way, way off track by taxing the General Fund, the general taxpayers, for projects that only benefit certain users. We’ve got to get back to some tried and true principles of government finance and one of them is on project like the Delta the beneficiaries pay.”

McClintock fielded questions for an hour and a half.