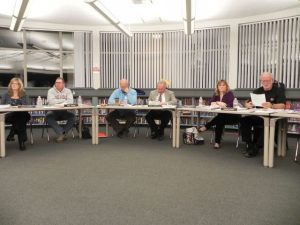 Tuolumne, CA — The Summerville High School Board of Trustees voted unanimously to approve a unionization feasibility study. The study will look at what benefits there would be to have Sonora and Summerville high schools in one district.

At last night’s meeting, several members of the public voiced their concerns before the vote. Those concerns ranged from keeping school traditions and fear of losing students to Sonora High. Lynn Culver, a teacher at Summerville questioned, “This notion of unification has been batted around before. I find it ironic that none of this was mentioned when we were trying to go ahead and pass bond measures. Now all of a sudden we’re interested in unifying.”

In agreeing to the study, the board voiced concerns about making sure Summerville High would be represented equally in the study. Tuolumne County Deputy Superintendent Margie Bulkin says, “I sense from both boards that we want to move forward, but we want to make sure we get accurate and appropriate information. So I’m thrilled that they have taken a leap of faith and want to investigate and see if something good can come out of this.”

Tuolumne County Superintendent of Schools Joe Silva called for the study after he got wind of a voter petition being circulated in the community that asking for a total reorganization of county schools into one district. That petition could bypass input from the board on any merger. Bulkin says now that both boards have agreed to the study Silva will begin the process of working with the Sonora Foundation to hopefully fund the study.