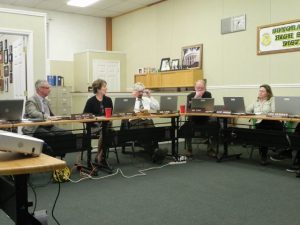 Sonora, CA — The Sonora High School Board of Trustees welcomes a high school unionization study. At its meeting tonight the board agreed it is a good idea to have a study done about placing Sonora and Summerville High Schools in the same district to see if it would save money.

Sonora High Superintendent Dr. Mike McCoy says, “These are very difficult financial times and anything that could take away from administrative costs, from duplicate efforts, or doing the same services the same way; if we can put that money back in the classroom I think the public would be very interested in knowing about that.”

Tuolumne County Superintendent of Schools Joe Silva initiated the idea of a new feasibility study. Deputy Superintendent Margie Bulkin filled in for Silva at tonight’s meeting and told the board what prompted Silva’s call for a the study.

Silva plans on asking the Sonora Area Foundation to conduct the feasibility study. The Foundation funded a study 13 years ago looking into combining elementary districts with the high schools. There was not a cost savings found at that particular time. Click here for an earlier story on that study.

Consolidation would allow the two schools to potentially share a Superintendent and additional other services. The discussion comes at a time when Summerville High Superintendent Dr. John Keiter announced that he will retire effective June 30th. Also, both schools will soon receive repairs and renovations as part of the Measure J and H bond measures that were approved last November.

Summerville High School’s Board will meet Wednesday evening at 6:30 at the school to discuss the same study.