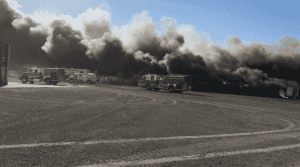 In a filing submitted to the California Public Utilities Commission (CPUC) today, the company is promising to spend $2.3 billion this year to improve wildfire prevention after its equipment was blamed for causing more than 1,500 Northern California wildfires since 2014. It is part of the company’s 2019 Wildfire Safety Plan that asks regulators for permission to cut power during wildfire threats throughout its entire system, which serves 5.4 million customers in the northern and central parts of the state.

The utility’s emphasis on blackouts has drawn criticism from a Bay Area consumer advocacy group charging that power outages should only be an emergency response and not a routine preventive measure. Claiming that “It puts customers in harm’s way,” the group calls on PG&E to make safety improvements on equipment and employee training more of a priority than cutting power.

Promising to overhaul much of its wildfire-prevention measures in response to growing legal, financial and public pressure, the embattled utility also proposed removing 375,000 trees this year after cutting down 160,000 last year and increase in-depth pole inspections from 9,400 last year to 40,600 this year. The company also plans to bury underground or insulate 150 miles of bare wire next year and 7,100 miles over the next decade while doubling its weather stations to 400.

The utility filed for bankruptcy last month as its equipment has been blamed for starting 17 major wildfires in the last two years that has left the utility facing more than 1,000 related lawsuits that could cost more than $30 billion. The safety plan is a result of a new state law passed in response to the destructive 2017 wildfires that requires utilities to file their wildfire-prevention plans with the CPUC. The agency has scheduled several public meetings to review and amend the proposals before they are adopted.