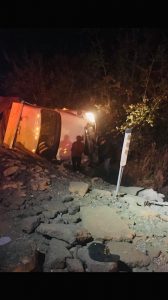 Update at 11:55am: The man killed in the crash has been identified as Reginald L. Love of Lodi.

Update at 10:30am:  The CHP reports that the man tragically killed in a crash in Calaveras County was a 48-year-old from Lodi.

The crash happened Friday at 8:52pm on Highway 12 east of Wards Avenue. He drifted off the right shoulder in his 2010 freightliner truck, overturned and went down a steep embankment. The CHP reports that the victim was ejected because he was not wearing a seatbelt.

Original story posted at 6:15am: Wallace, CA — There was a fatal crash over the weekend in Calaveras County.

The Calaveras Consolidated Fire Department reports that a dump truck rolled over into a ditch on Highway 12 near Wallace. It happened on Friday evening and the driver was ejected from the vehicle and killed. The name of the victim has not been released at this time. The Clements Fire District also responded to the incident.