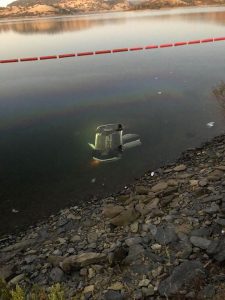 Update at 8:40am: The CHP has released the name of the woman that sustained major injuries after crashing into Lake Pardee on Saturday evening.

35-year-old Autumn Hernandez of Ione was driving a 2013 Hyundai Elantra northbound on Sandretto Road (Pardee Dam Road), north of Campo Seco Road, and lost control going into a curve. The vehicle struck a guardrail, traveled over the top of it, went down a steep embankment, and into the water. Hernandez was flown to Memorial Medical Center in Modesto to treat her injuries. Her current condition is not immediately known. The CHP reports that it is unknown if alcohol or drugs played a factor in the crash.  The incident occurred around 6:05pm.

A vehicle crashed through a guardrail barrier, went down an embankment and into the lake. An unidentified woman sustained life threatening injuries and was pulled from the submerged vehicle by some citizens prior to the arrival of first responders. She was transported by air ambulance to a trauma care center outside of the area. There were no reported witnesses to the accident. The vehicle was searched by the responders, and the surrounding area by the Calaveras Sheriff’s Office Dive Team, and no additional victims were located. Agencies on scene included the Calaveras Consolidated Fire Department, CAL Fire, East Bay MUD, Ambulance, Calaveras Sheriff and the CHP.

No additional details are immediately available.