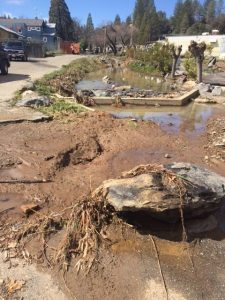 Sonora, CA — The Tuolumne County Supervisors heard an update today on efforts to repair around $2-million in flood related damage along Ferretti Road.

The road received heavy damage during a flooding event in early March. Assistant County Administrator Tracie Riggs notes that staff worked with Caltrans in hopes of receiving funding from the Federal Highway Administration. The county heard back from Caltrans this past spring that federal funding had been approved. However, in August, the CRA was notified that the Federal Highway Administration had not actually yet obligated funding to Caltrans, so if the county goes forward, it is doing so at its own risk.

Upset, Riggs stated, “You can imagine how we’ve all reacted to that.”

The county is now investigating ways to receive state office of emergency services funding, in the event that the federal funding fails to materialize. If it is federally funded, the local match is only 12.5-percent (county would pay around $250,000) but if it is a state funded disaster project the match is 25-percent (county would pay around $500,000).

Community Resources Agency Director David Gonzalves noted that decision time was coming soon regarding whether the county should proceed with the project without the guarantee of federal funding. Board Chair John Gray, who represents the south county, argued, “Frankly stated, it has to be fixed. It is a major collector in the county, and it has got to get fixed.”

If the county has to pay an additional $250,000 it would likely come from a dwindling reserve fund. The county plans to learn more from the state and federal government over the coming weeks. This past spring the county had indicated that the hope was to have Ferretti Road repaired by the end of the year.