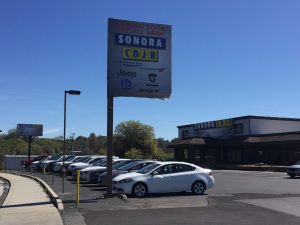 Sonora, CA — Indications are that a new dealership will open soon at the former Sonora Chrysler, Dodge, Jeep and Ram site on Mono Way in east Sonora.

Owner Vince Porter opened the former dealership in March of 2016, but it has been closed for many months.  A new ownership group has taken a big step toward re-opening at the site.

A fictitious business name was filed with the county by a group called “Sonora Automotive Inc., and  Clarke Broadcasting has learned that it is the same group that owns Lodi’s Chrysler, Dodge, Jeep and Ram dealership. When asked about it, Tuolumne County Economic Development Authority Director Larry Cope confirmed, “We have been working with a company to reboot the Chrysler dealership on Mono Way. It is the one listed in the fictitious business name, ‘Sonora Automotive Inc.’ We have been working with them to bring a Chrysler dealership back to Sonora. Things are still being finalized, and there is some final paperwork that still needs to be done, but we are well on the way to hopefully bring that dealership back to life.”

It remains unclear how soon the dealership may open, but steps are being taken in that direction.