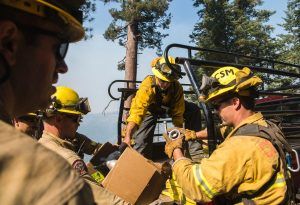 Mariposa County, CA — While the Ferguson Fire is mostly corralled, there remains some pockets of un-burned vegetation in the Grouse Creek drainage along Wawona Road that could put up smoke this week.

It may be visible for visitors coming to Yosemite National Park. As reported earlier, the Mariposa Grove of Giant Sequoias reopens today and Yosemite Valley will be open tomorrow. The fire has burned 96,457 acres and there is 86-percent containment. Those visiting Yosemite should be mindful of firefighters, moving equipment and road construction that could cause traffic delays.

The Incident Command team adds that there remains a threat for monsoonal moisture over the Ferguson Fire today so there could be showers and thunderstorms. Temperatures in the footprint are expected to range from 91-102 degrees. 1,020 firefighters remain assigned to the incident, five helicopters, 69 engines, six water tenders and 14 dozers.