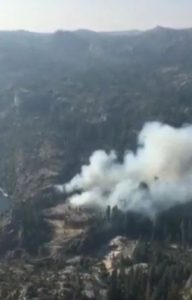 A timeline of the Donnell Fire is here.

Update at 7:40 p.m.: The Donnell Fire that was spotted around 1 p.m. on Thursday in the Stanislaus National Forest has grown to an estimated 350 acres. The flames are burning on the Summit Ranger District near Donnell Lake, off Highway 108. Forest Service spokesperson Diana Fredlund relays that a helicopter has been using a bucket to fill-up with water from the lake to dump on the fire this evening. She also notes they are still waiting on resources to arrive and acknowledges that some will not get to the site until Friday morning. Fredlund relays the strategy overnight, “They’re going to keep monitoring it. They’re going to be there overnight. I don’t know that they are actively going to be fighting the fire only because it is such rough terrain. We are waiting for the hotshots to come in as they’re the ones trained to do it. So they are going to be keeping an eye on it and in the morning we’ll be able to give you a better idea on it.”

Fredlund adds that additional resources have been ordered including an additional strike team with five engines and four hand crews. There is no containment on the blaze. Further details on the fire’s activity, advisory evacuations and resources can be viewed below.

A special thanks to community partners Melissa Foiada and David Jigour for sending in the video and pictures.

Update at 6:30 p.m.: There has been a hike in the Donnell Fire acreage. The Tuolumne County Sheriff’s Office has issued evacuation advisories for Wagner Tract, Clark’s Fork and Camp Liahona in Clark Fork. Forest Service spokesperson Diana Fredlund relays that a helicopter was able to survey the blaze and it was bigger than first estimated. It is now projected at 300 acres. Fredlund updates, “The helicopter on scene has started bucket work by getting the water from Donnell Lake. Some ground resources are on scene but I’m not sure that they have physically tried to hike into the fire just yet because it is very remote. That is where the hotshots will come into play.”

Two hotshot teams have been called to the scene along with a strike team and two dozers, but not all have arrived, according to Fredlund. For further details on the fires activity view below.

A special thanks to community partner Melissa Foiada for sending in the video.

Update at 5:45 p.m.: The Donnell Fire’s acreage continues to climb. It is burning in the Stanislaus National Forest on the Summit Ranger District near Donnell Lake. Forest Service Spokesperson Diana Fredland reports, “The fire has jumped from 75 to between 100 and 125 acres. There is an evacuation advisory for the Wagner Housing tract.”

Fredlund did not know who many homes or the number of people that might be involved. She adds that it is moving to the northeast on the north side of the Middle Fork Stanislaus River and there is no containment.

Check below for details on the fire’s spread and resources on scene.

Update at 4 p.m.: The Donnell Fire acreage has jumped, again. It is burning  in Tuolumne County on the Stanislaus National Forest near the area of  Donnell Lake and the vista, off Highway 108 on the Summit Ranger District. Forest Service spokesperson Diana Fredland reports the fire has grown from 40 to about 75 acres and is burning at a moderate rate of spread in brush and timber. She adds that it is running along the Middle Fork Stanislaus River and there are actually three fires. “The fire consists of a main fire and two spots fires,” details Fredlund. “The spot fires are about a quarter mile up the stream from the main fire. Everything is on the north side of the river.”

Further details including resources on scene can be viewed below.

Update at 2:45 p.m.: The blaze named the Donnell Fire burning in the Stanislaus National Forest on the Summit Rangers District in Tuolumne County off Highway 108 near the same named Donnell Lake and vista area has jumped from 25 to 30 to nearly 40 acres. Forest Service spokesperson Diana Fredland details, “There is a moderate rate of speed. It’s a pretty rugged area. It’s not far from the area where the McCormick Fire was burning. There are resources requested that include two type one hotshot crews, a strike team, which is made up of type three engines, two dozers  and one helicopter.”

Fredlund adds that while those crews have been requested but not all of them are on site yet.

Update at 1:50 p.m.: A vegetation fire on the Stanislaus National Forest has jumped in size from nearly two acres to 30 aces. The flames are burning in Tuolumne County near the area of Donnell Vista, off Highway 108 on the Summit Ranger District. Forest Service spokesperson Diana Fredland has the  latest, “I know it is a little smoky up there so they’re having some difficulty sizing the fire and it is pretty steep. The Incident Command Team is brining in additional resources.”

There is no containment at this time and no details on whether any structures are threatened.

Original post at 1 p.m.: Stanislaus National Forest, CA — Air and ground crews are heading to a vegetation fire that was called into the Stanislaus National Forest dispatch.
The flames are reported to be burning in Tuolumne County in the area of Donnell Vista, off Highway 108 in the Summit Ranger District. Forest Service spokesperson Diana Fredlund details, “It’s a one to two acre fire in the wilderness near the Donnell Inlet. We are ordering additional resources up to take a look and we’ll give your more information as we learn more.”

There is no word as to whether any structures are threatened at this time. We will bring you further details as soon as they come into the news center.