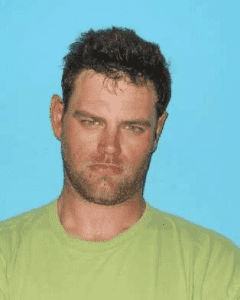 Sonora, CA — Sheriff’s officials say the circumstances around the capture of an attempted bank robber yesterday afternoon were about the best that could have happened.

As reported here, the Tuolumne County Sheriff’s Office responded early in the four o’clock hour yesterday afternoon to a hold up alarm and 911 report of a robbery in progress at BBVA Compass Bank at The Junction Shopping Center. Quickly arriving on scene, deputies were able to arrest 29-year-old Kyle Lee Hoover of La Grange as he walked out of the branch location with the $5,000 he had demanded from tellers.

Today, spokesperson Sgt. Deborah Moss recounts to Clarke Broadcasting that the call came in from the bank at 4:16 p.m.; within five minutes deputies arrived on scene to catch Hoover as he was exiting. “He entered BBVA Compass Bank with the intent to commit theft…handed a note demanding $5,000 in cash while identifying himself as a U.S. Marshal and bank employees gave Hoover the money out of fear that he would harm customers,” she summarizes.

Moss further reports that Hoover’s note read: “Cease and desist. Member FDIC BBVA Compass Amount of $5,000 USD by U.S. Marshal Rico Suave practicing.” She acknowledges the message as somewhat baffling. After all, “Rico Suave” is the nickname of a World Wrestling Council star, a Hannah Montana series character and the moniker of the lady-loving narrator in Gerardo’s 1990 rap single hit.

Also somewhat odd, Moss says is that Hoover used to be a customer several years ago at that bank, as he was recognized by a teller.

Asked if he acted alone, was armed or a convicted felon, Moss confides that investigators do not think anyone else was involved in the incident and that he did not have any weapons on him at the time. She adds, “He is known to local law enforcement and is currently on probation for prior illegal activity, including a firearms arrest.”

Moss emphasizes that the tellers did “a fantastic job” in keeping the situation from escalating and being able to surreptitiously make a report to 911 dispatch. “They were calm and went back on their training…called 911 immediately and kept him there by counting out the money and keeping him calm,” she says with admiration.

She points out, “That allowed us to get him as he was leaving the bank instead of creating a hostage situation or us having to chase him. As far as bank robberies go this is about the best you can get right here…he was caught as he exited — there was no high speed chase — no gun battle…and the money was recovered.”

Hoover is currently charged with first-degree robbery and entering a building with the intent to commit a crime but more charges could be added. He was assigned a bail of $50,000.