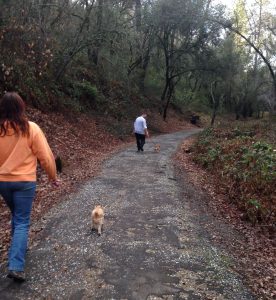 Sonora Mayor Connie Williams, who also heads up the Vision Sonora Committee, says the topic will be a lead discussion item at its Thursday meeting.

Describing Sonora as already somewhat dog-friendly, Williams admits, “We do have people who do not bring their bags with them — and do not take ownership of their dog’s ‘deposits’.” Riffing off that comment, she remarks, “We are going to put up doggie bag stations so they can pick up [a bag]…and deposit those ‘deposits’ in a trash can.”

More Than A ‘Beautification’ Measure

It was back in March that Sonora City Council approved Tuolumne County Land Trust’s offer following its presentation to Vision Sonora to donate at least one dog waste station and potentially help fundraise for more. Pet waste, besides being obviously unpleasant to encounter, presents environmental and physical health concerns.

Since the idea has taken off like an Australian Shepherd after a squirrel, Williams says the Vision Sonora Committee will be deciding how many to initially install, indicating that they will probably begin showing up along Washington Street, Coffill and Grigsby parks along with other park areas.

Vision Sonora’s Design Review subcommittee already opted for the city to go with using the bag dispenser stations instead of larger-sized ones that include a waste can since there are already sufficient trashcans downtown.

Williams says Tuolumne County Visitors Bureau and Sonora Chamber of Commerce have come on board as partners, respectively donating $1,000 and $300 to purchase the units, which she says cost about $100 each. She adds that today the trust will be meeting and among its orders of business is to determine how much they might contribute, given the current support.

If the committee opts to support additional stations she says that sponsorship donations for the poop bag stations could be acknowledged like the new downtown benches are — with affixed name plaques, which sounds like a certainly unique memorial gifting opportunity for dog lovers and others.

With regard to servicing the stations, although details have yet to be worked out, Williams surmises that WATCH Resources workers, who already tend to the downtown area on Wednesdays, may get that duty and that the city may well cover the cost of the bags.