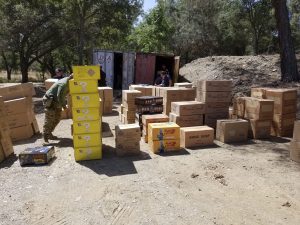 Sacramento, CA – It is being called the “largest illegal fireworks seizure in California history” by CAL Fire and the ring spanned from Oakland to Copperopolis where one member was taken into custody.

At a Sacramento press conference today, CAL Fire Staff Chief of Law Enforcement Shane Cunningham revealed some startling details, “Over the past two weeks CAL Fire Law Enforcement Officers arrested seven people and seized 25 tons of illegal dangerous fireworks. Law enforcement officers have reason to believe that these suspects have been illegally importing, transporting, storing, distributing and ultimately selling illegal and dangerous fireworks throughout California, with indications that this practice has gone on for at least 30 years.”

One of the suspects taken into custody is Donald Cerasi of Copperopolis, whose picture along with the photos and names of five of the other suspects are in the image box, were arrested and booked into the Calaveras County Jail. Ten search warrants were served in Calaveras, Stanislaus, Alameda, and Contra Costa counties. In carrying out those raids, Chief Cunningham shares, “Officers seized over 49,000 pounds of illegal fireworks stored at locations in Copperopolis, Modesto, Salida, Hayward, Walnut Creek and Oakland. In addition, a load of dangerous illegal fireworks, ready for transportation, was also discovered. Officers also seized over $115,000 in cash as well as a variety of computers, cell phones, firearms and personal items.”

The 3-year-investigation that originated from a tip from a citizen, according to Chief Cunningham, has taken the dangerous firecrackers off the streets with the Fourth of July holiday just around the corner.

“In California, we have a zero tolerance for the use and sale of illegal fireworks,” said Chief Ken Pimlott, director of CAL FIRE. “With the increase in large, devastating fires across the state, we cannot stand by and allow this type of activity to occur, threatening not only property and natural resources, but the lives of the citizens we protect.”

CAL Fire cites statistics that show typically on Independence Day, fireworks account for two out of every five reported fires in the U.S. — more than any other cause. Yearly in the state, firecrackers start 18,500 fires, which include 1,300 structure fires and 300 vehicle fires. These fires, on average, cause three deaths, 40 civilian injuries, and $43 million in direct property damage, according to CAL Fire. Nearly 12,000 people are injured by fireworks with a quarter of those being children under 15-years of age.