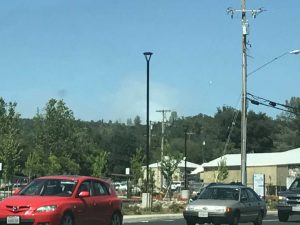 Smoke plume seen in Sonora near the upper Savemart store

Sonora, CA — Clarke Broadcasting has been fielding calls from the public reporting a smoke stack that can be seen in the direction of Twain Harte – it is not a wildfire.

The picture in the image box shows the smoke plume as seen from Mono Way near the upper SaveMart Store in Sonora. As reported here two weeks ago, the Stanislaus National Forest alerted the public that the Crandall Underburn on the Mi-Wok Ranger District will take place along Forest Road 3N24, off Italian Bar Road (Forest Road 2N63) south of Deer Creek.

The burn was to begin last Monday (May 21) but was postponed due to unfavorable weather conditions.  Up to 140 acres will be treated with low-intensity fire in various size blocks of acreage set ablaze each day. Forest officials report another 50 acres will be burned during the day tomorrow and as weather permits throughout June.