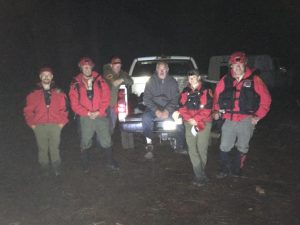 Tuolumne County, CA — The Tuolumne County Search and Rescue Team was busy looking for a man from Modesto who was lost near the Aspen Meadow Pack Station.

50-year-old David Barnes went missing while hiking on Saturday afternoon. He went off a trail and became separated from his family while looking for Goshawks, a specific breed of hawk. When he didn’t return after several hours his family became worried. He was able to send a text message to a friend, stating he was lost, and the search and rescue team was dispatched.

Barnes was able to send a text with his GPS coordinates and stating that he was located near a stream and meadow. Searchers determined the area was Bell Meadow and began their hike in. As officials neared, Barnes shined his flashlight into the air, and he was located and rescued. Temperatures had dipped into the low 30’s by that point on Saturday evening. Barnes was still in good health and very happy to be reunited with family.