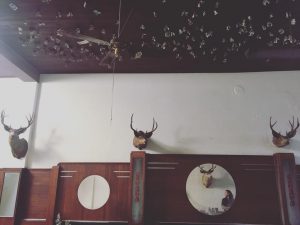 Old bills on Servente's ceiling during renovations May 2018

Sonora, CA — One of the Mother Lode’s historic watering holes in the heart of downtown Sonora is lamenting a recent burglary during which small bills pinned to its ceiling for years were taken.

According to Sonora Police spokesperson Sgt. Glenn Roberts, Servente’s Saloon on South Washington Street, which remains closed during renovations, was broken into sometime just ahead of the Memorial Day holiday. He says one or more burglars slipped in sometime between last 4 p.m. last Thursday and 12:15 Friday afternoon, although the theft likely occurred during hours of darkness and not in broad daylight.

“The front door lock was pried off and the businesses on both sides also had pry marks on their doors,” Roberts adds. Specifically missing, he says is about $100 in old small-bill currency that was apparently scraped off two areas of the nearly 14-foot ceiling, possibly with a rake.

He surmises, “I think they just had taken it because they want the money. If I was a store owner or the public I would be looking for old bills, faded bills, folded…with signatures. My understanding is back in the day they would write the name, date and stuff and then throw them up…so they would attach into the ceiling.” Anyone spotting old currency with this description should call Sonora Police to see if there is a possible connection to the case.

Owner Marianne Wright, who formerly operated Tar Flat, which sold home goods and gifts downtown, recently bought Servente’s and is hoping to have it retrofitted and back open by this fall. Using both the ABC on and off-premise licenses that transferred with the historic establishment’s sale, she plans to sell fine spirits for take-home along with other items upfront and continue operating the “behind the line” bar in the back part of the premises.

Wright shares with Clarke Broadcasting that the electricity was turned off when the break-in occurred because rewiring work was going on. She adds that floodlights are now installed and a security system is in the works as well. While the theft upsets her, she says the damage to the old doors is more upsetting, although they can be fixed.

Many Gold Rush area bars are known for their ceiling displays of old bills. A popular method of affixing them is by using quarters and a thumbtack to launch folded currency with enough force so that it will stick although some establishments use a pole.

According to lore from back in the day, reasons for doing it ranged from giving immigrants seeking their fortunes a safe spot to personalize and “stow” some “Get Home” money in a safe place — like on the ceiling of a bar — to providing others a way for leaving some loot at a favorite haunt that would ensure there would be enough to covering drinks at a later date.