Hiker Dies In Fall From Half Dome Cables 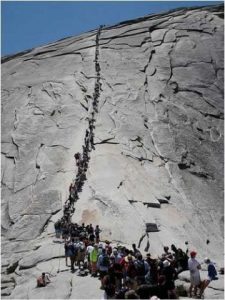 Yosemite, CA — Yosemite National Park reports one person has died after falling from the Half Dome cables.

There were thunder storms in the area creating wet conditions on the rock when the male hiker fell to his death Monday around 4:30 p.m. Park spokesperson Jamie Richards states, “The party slipped out of sight… It was foggy and cloud covered at the time so the people on Half Dome couldn’t see what happened, they just knew that someone had fallen and slipped out of view.” She went on to describe the rescue efforts, “Park rangers got on scene as quickly as possible and started a search. We were able to find the missing hiker today. He did not survive the fall.”

The hiker’s body was recovered today at 1 p.m. The hiker is a foreign national, but Richards says no further details regarding the victim are being released pending notification of family. He was hiking with another person who was not injured in the incident. What caused the hiker to fall to his death is under investigation.