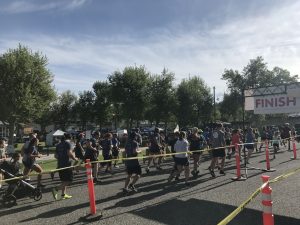 It also drew virtual runners from across the world, bringing the total number entered to 522. 45 volunteers were also on hand to help the event run smoothly.  Luc’s Run raised over $25,000 for the Major Lucas Gruenther Legacy Foundation which awards scholarships to both family members of fallen heroes and those who are choosing to pursue their passions in life. Major Gruenther, a Summerville High graduate, tragically died in an F-16 plane crash in 2013. His mother, widow, daughter, brother and many other family members were on hand Saturday to help promote his legacy. Major Gruenther was also a talented photographer, and some of his work was available in the silent auction.

Jack Birtwhistle of Sonora was the top overall finisher in the two mile run with a time of 12:51, and he was followed by second place Stacy Berger of Tuolumne with a 14:53.