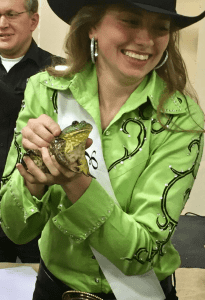 Angels Camp, CA — Awards and other tributes along with customary frog smooching marked this year’s leap into what will be the 90th Birthday of the Calaveras County Fair and Jumping Frog Jubilee.

Appropriately enough, the theme for this year’s running of the May 17-20 events is “Going Frog Wild.” One of the Golden State’s oldest county fairs, the event’s roots go back 125 years — 35 years before the frog jumping portion of the festivities that were added in 1928.

‘Frog Wild’ Fun For Everyone

Thursday, May 17 at 8 a.m. is when this year’s Fair officially opens for Kids 12 and Under Free Day. At noon the California Carnival will begin taking tickets as free cupcakes and a birthday party get underway to mark the 90th year of the Frog Jump. Along with an array of entertainment and attractions other daytime festivities include free frog jumping for kids 12 and under and the Saddle Queen Competition at 2 p.m. The Miss Calaveras Scholarship Pageant begins at 8.

Friday will feature numerous livestock shows and sales along with the Calaveras Idol contest with the winner opening for Main Stage performer, Americana band Reckless Kelly from Austin, TX. On Saturday, active military service personnel with ID will be admitted free. Among the day’s highlights, Peewee Showmanship and arm wrestling contests; the CCPRA Pro Rodeo will start at 7:30 p.m. Sunday will bring the Junior Livestock Auction and Frog Jump Challenges followed by the International Frog Jump finals and the Destruction Derby.