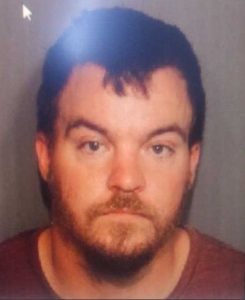 Angels Camp, CA — Caught in the crosshairs of a Highway 4 near Highway 49 traffic stop, a Mother Lode visitor was hauled to jail on felony warrants and a charge of public drunkenness.

According to Angels Camp Police Chief Todd Fordahl, Billy Garrett, 30, of Sacramento had been a passenger in a vehicle that was parked along Highway 4 with its trunk open late Saturday afternoon.

The chief recounts that police stopping to make a possible courtesy assist there located Garrett standing outside. Talking with the female driver, who was still seated inside, they were advised that she and Garrett had been arguing and she did not feel safe with him.

Chief Fordahl adds that further investigation determined that Garrett had been consuming alcohol and marijuana and a subsequent records check revealed he was being sought by Sacramento County law authorities for felony robbery and burglary along with being in violation of a court order to prevent domestic violence.