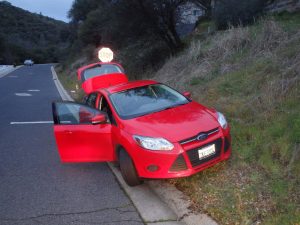 Sonora, CA — The Sonora Police Department awoke a Sonora man and arrested him on a charge of vehicle theft.

It happened at 5:30am on Tuesday along South Arbona Circle. The PD received a report of a vehicle suspiciously parked on an embankment with the driver sleeping behind the wheel. An investigation determined that 20-year-old Noel Pedro Figueroa had entered the car through an unlocked door, released the emergency brake, and attempted to put it into reverse. He rolled down the hill backwards and at some point fell asleep. The owners of the vehicle do not know Figueroa and he did not have permission to be inside the car. He was arrested and transported to Tuolumne County Jail for vehicle theft. No additional details are immediately available.