Hanvelt, Others Bring Rural County Concerns To The U.S. Capitol 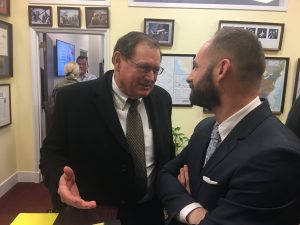 Sonora, CA — Following this past week’s whirlwind U.S. Capitol trip to lobby for Tuolumne and other rural counties in the state a local lawmaker recaps how things went.

In an interview with Clarke Broadcasting,  Tuolumne County Supervisor Randy Hanvelt recounts his latest trip to Washington as a member of the Rural County Representatives of California (RCRC) leadership delegation. As reported here, Hanvelt was recently appointed the organization’s Vice Chair.

A last-minute call from Sacramento to talk at a state budget meeting last Friday about economic and other impacts of wildfires shifted his initial travel plans, which were further derailed by a nor’easter hammering the East Coast that grounded his flight in Detroit Friday overnight. However, after arriving Saturday morning, Hanvelt and his group hit the ground running through a weekend full of policy sessions on public lands management; among these were Western Region Caucus and Western Interstate (WIR) meetings, where all the involved states have at least 50 percent publicly owned lands. With Yosemite National Park, the National Forest and BLM managed lands all within its boundaries, Tuolumne County itself contains over 70 percent federally owned lands.

“We went lobbying on The Hill all day Monday and met with various lawmakers…saw the FCC [Federal Communications Commission] and new U.S. Forest Service Chief Tony Tooke, who resigned [two days later over surfacing sexual misconduct allegations],” Hanvelt recalls. After meeting and working with Tooke in recent years he conveyed a bit of disappointment, as having a personal “in” with the agency’s top executive could have been helpful.

Hanvelt continues, “On Tuesday, same deal [more lobbying] but with RCRC’s connections we got invited to the White House.” There, the group participated in a three-and-a-half hour meeting in the Eisenhower Executive Office Wing with BLM officials and White House advisors, including Kellyanne Conway. “It was absolutely amazing…they took questions, talked really frankly…did not beat around the bush — I was really impressed,” he admits.

Listing off key issues his group was pushing, Hanvelt states, “We were selling forest management, health, resiliency. We were trying to impress upon them that we need PILT [payment in lieu of taxes], because when the government owns 50 percent or more of your county, all of the land is not in the tax base — but that does not mean that it does not cost you something.” RCRC is also currently pushing for a Secure Rural Schools (SRC) funding extension and rural broadband access, which Hanvelt especially sees as a major issue for public safety reasons. Too, he adds, “The Farm Bill has not been renewed — it is two years behind — so we are putting in the effort to try to get it passed.”

After the session, the RCRC entourage got a tour of the wing that included a stop in Vice President Pence’s ceremonial office, where Hanvelt slipped in for a photo opp behind what turns out to be the original mahogany desk that President Teddy Roosevelt had commissioned for his own use. (To view the photo, click into the image box slideshow.) Later, a final dinner in Georgetown on what would be his last night in DC brought an even bigger final thrill when Israeli Prime Minister Benjamin Netanyahu and his wife arrived in a swarm of Secret Service personnel — subsequently settling down for a quiet party-of-two dinner within the sight line of Hanvelt’s table.

The RCRC board will debrief at its meeting in the coming week, according to Hanvelt. Moving forward, he says, “We keep pushing for the help to do the things that our county needs. The Forest Health [platform] is everything — it’s public safety…economics…the environment…air quality and water. We are pushing hard at the federal level and state level to make that happen.”