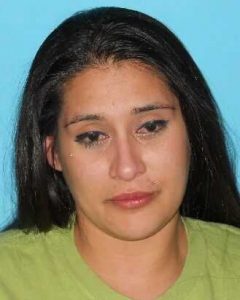 Sheriff’s spokesperson Sgt. Andrea Benson says that just before 11 o’clock Sunday night, 31-year-old Brianna Grijalva of Jamestown was spotted by a deputy while being driven as a passenger in her own vehicle, a black BMW, as it entered the Black Oak Casino parking structure.

Since Grijalva — a convicted felon out on probation — had warrants out, a traffic stop was conducted during which a used syringe and a stun gun were located in the vehicle. Benson adds that during intake into the Tuolumne County Jail over one and a half grams of methamphetamine was found hidden in Grijalva’s bra.

Deputies responding to the Outpost Deli in Soulsbyville early Saturday morning were called to investigate a report of a suspicious vehicle and person on premises.

Once on-scene, they located 29-year-old Clay Aho of Tuolumne in his 2004 black Chevrolet. Since he was out on bail from another case involving possession of a firearm and meth, deputies did a search that turned up a firearm. They noted that Aho admitted to being a narcotic addict and was also showing signs of being under a controlled substance; specifically, red eyes, rapid speech and uncontrollable mouth movements.