Much Of Mother Lode In Moderate Drought 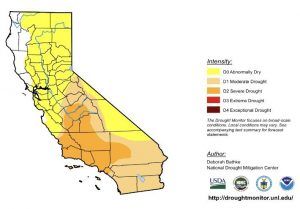 Sonora, CA — The US Drought monitor has released a new map showing nearly half of California is in the midst of drought conditions.

19-percent of the state, around the greater Los Angeles region, is in a “severe drought.” If more precipitation arrives later this week, and more during the month of March, it could help turn the tide.

Researchers review items such as rainfall, snowpack, local stream flow and others when determining if an area is in a state of drought.