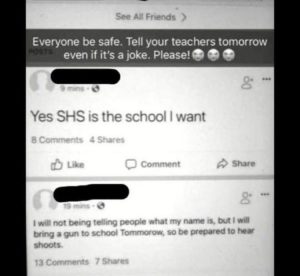 Update at 10:20am: Providing the latest information on reports of a social media threat, aimed at schools with the initials “SHS,” Tuolumne County Sheriff’s Office spokesperson Sgt. Andrea Benson says, “There is no credible threat to our local schools. This post went viral in a very short amount of time, all over the United States. A number of schools with those initials, and law enforcement agencies, were alerted and investigated the threat. The social media threat was deemed a hoax, and seemed to be directed toward a Springfield, Ohio high school.”

Law enforcement officials have been on scene at Sonora and Summerville high schools this morning.

Original story posted at 5:40am: Sonora, CA — The Tuolumne County Sheriff’s Office reports that a social media post has gone viral across the United States threatening violence at schools with initials “SHS.”

The sheriff’s office reports that several people have reported seeing the post locally, so while they believe it is a hoax, they do have a deputy assigned to investigate it, according to Sgt. Andrea Benson. Law enforcement personnel will be at Summerville High School this morning to coordinate with officials and ensure the safety of all students and staff. The Sonora Police Department will also be working closely with Sonora High School in a similar fashion.