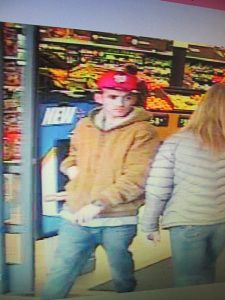 Sonora, CA — Sheriff’s officials are hoping members of the public might put a name to the face of a man who they say began racking up charges on a credit card reportedly stolen last week from a residence in Strawberry.

Today, the Tuolumne County Sheriff’s Office released a series of images captured from surveillance footage of the alleged suspect and a vehicle they believe is also involved. To view them, click into the image box slideshow.

Since the card was reported missing, over $2,000 in purchases have been charged to the card at several locations in Sonora and Oakdale. If you know who this man is or have any information regarding him or these crimes, please contact the Sheriff’s Office at 209 533-5815.