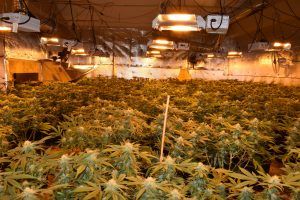 Calaveras County Sheriff’s Office Marijuana Enforcement Team with warrant in hand raided an illegal unregistered indoor marijuana grow at a home in the 8000 block of Baldwin Street. Inside deputies discovered that the entire house had been converted for the purpose of marijuana cultivation. The house held 1,447 pot plants, which were seized and destroyed.

Two suspects, a male Wenhai Yang and female Xiugin Yang, both 52 years old were arrested without incident. The couple was booked into the Calaveras County Jail for illegal marijuana cultivation, operating a drug house, and criminal conspiracy. Their bail was set at $30,000 each.

No further information is being released. As reported here earlier this month, Sheriff’s officials have voiced concern over the number of homes converted into pot grows with no supervision and the fire dangers that presents.