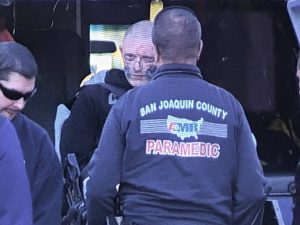 Stockton, CA – A prisoner with a distinctive tattooed skull on his face, was found at a home in the same county where he walked away from a work crew more than three weeks ago along Interstate 5.

As reported here last month, the San Joaquin County Sheriff’s Department notified neighboring counties; including Calaveras County that the fugitive might be in the Valley springs area as he had lived there in the past.

On Thursday around 10:33 a.m., a Stockton Police K9 brought 27-year-old Corey Hughes out of a Stockton home. Initially, the CDC Fugitive Task Force got a tip that Hughes was at a house in the 9000 block of Don Avenue. Once on scene, agents set up a perimeter around the residence and when knocking on the front door produced no answer, a K9 was sent into the home.

Hughes was taken into custody and subsequently treated at a local hospital for minor injuries before being booked into the county Jail. He had been housed in the Honor Farm after being sentenced on a weapons charge.