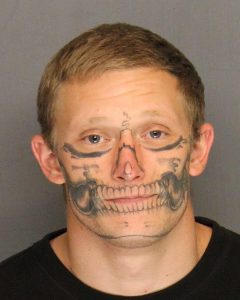 Valley Springs, CA – A prisoner that walked away from a work crew in San Joaquin County has Calaveras Sheriff’s officials warning residents to “Be On The Lookout” as the inmate has ties to Valley Springs.

The San Joaquin County Sheriff’s (SJSO) office notified neighboring counties of the 27-year-old escapee Corey Hughes after he took off from his work crew along I-5 near a country club around 1:30 p.m. He was housed in the Honor Farm after being sentenced on a weapons charge.

Calaveras County Sheriff’s officials want to alert the public that Hughes may be in the Valley Springs area as he has resided there in the past. He has a very distinctive facial tattoo as can be seen in the picture in the image box. Anyone who may have seen Hughes or have information on his whereabouts is asked to call the SJSO dispatch at 209-468-4400.

Ironically, Hughes had a little over two months left on his sentence with his release date being February 6 of next year.