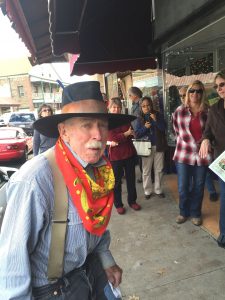 After thirty years of serving beans on the third Friday of each December, Galen “Mutz” Mutzner says that this is his final time.

Mutzner was Wednesday’s KVML “Newsmaker of the Day”.

It was thirty years ago on a Friday before Christmas, that Mutzner set up a pot on a sidewalk in downtown Sonora and began serving beans for free to anyone who stopped by and wanted them.

Over the years, the event began to catch-on and it soon became an annual tradition for workers and the general public in downtown Sonora. The event has been running strong with several volunteers ever since.

According to Mutzner, one man estimated that over 700 people attend the Bean Feed each year.

When asked why he will no longer serve beans (and other food including garlic bread) after this year, Mutzner responded by saying, “I began this by saying that I would serve beans for 30 years. And now I’m 90 years old. It’s my party and I did this for as long as I wanted. After this year, if someone else wants to continue to do this, it is up to them. However, it won’t be my bean feed any more. Maybe they could say my name every once in a while.”

The Bean Feed will begin at noon on Friday and it will be followed by the traditional Pop Hudson Sing at 12:45, this year at Courthouse Park in Sonora.