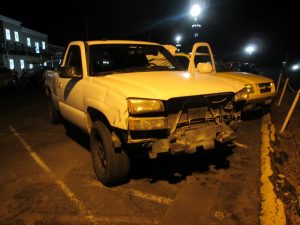 Jamestown, CA — Arrests for drug possession and having a loaded unregistered Ruger handgun and methamphetamine were made early today in a local casino parking lot.

According to Tuolumne County Sheriff’s spokesperson Sgt. Andrea Benson, a deputy patrolling through the Chicken Ranch Casino parking lot approached a banged up pickup missing both part of its front bumper and a current registration tag.

The vehicle was occupied by 21-year-old Alyssa Pifer, a Turlock resident, who was sitting inside while waiting for her 21-year-old boyfriend, James Gonzales of Ceres to emerge from the casino. Since she admitted to having meth hidden in her clothing the vehicle was searched and deputies wound up confiscating a loaded Ruger LCP .380 pistol and drug paraphernalia.

Pifer was arrested for possession of drugs, Gonzales for carrying a loaded firearm and possessing an unregistered handgun and both were additionally charged for having the drug paraphernalia.  Sgt. Benson notes that meth, as it is such a highly addictive drug, continues to destroy the health and lives of those who get hooked. Speaking on behalf of her office, she emphasizes, “We have zero tolerance for illegal drugs in our community and will continue working hard to keep Tuolumne County safe.”