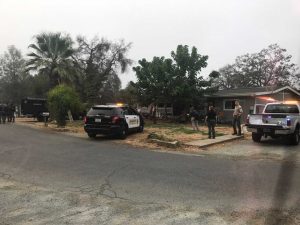 Update at 12 noon: Sheriff’s officials report Dale and Lauri Biehle who were actively being sought for operating a drugs for sales operation at their home are both now in custody.

Officials report that members of the narcotics team saw Lauri Biehle driving in Jamestown earlier this morning and stopped her at Willow and 5th Avenue where she was taken into Custody. Shortly thereafter, Dale Biehle, who was being seen before a judge at the Tuolumne County Superior Court for a previous drug sales case, was afterwards remanded into custody and booked into the county jail.

Original Post at 11:05 a.m.: Sonora, CA – A multi-unit supported drug bust descended on a Sonora residence for a narcotics search and found evidence but not the couple being investigated. So now they are asking for the public’s help.

Among the items taken as evidence of narcotics sales were methamphetamine, packaging, drug paraphernalia and measuring scales. However, the couple was not home at the time and both are now actively being sought on charges of maintaining a place to sell narcotics. He is also now wanted for committing a felony while out on bail.

Anyone who might see or know of their whereabouts are asked to contact the Tuolumne County Sheriff’s Office at 209 533-5815. To view photos of both, click into the image box slideshow.