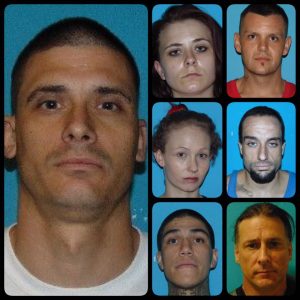 Sonora, CA — A large-scale operation busted 14 involved with smuggling narcotics into the jail in ways ranging from personal letters to body cavities and through contraband courthouse drug “drops.”

According to Tuolumne County Sheriff’s spokesperson Sgt. Andrea Benson the narcotics team, detectives and probation officers cooperated on surveillance missions on multiple occasions over the last month at the Tuolumne County Superior Court buildings. It resulted in narcotics agents and jail transport deputies confiscating at least four packages containing methamphetamine, marijuana and tobacco that she says were destined for the jail.

While the investigation is still ongoing, Sgt. Benson reports that yesterday morning Dustin Stevens and Stormi Breseman were arrested for criminal conspiracy for attempting to smuggle narcotics into the jail. Johnathon Gavi and Jillian Lawson Turiello were additionally located and arrested on local warrants during the sweep.

Seven In Custody For Drug Offenses Arrested On More

In other related arrests, Kyle Birdsong was charged on Aug. 25 for retrieving and concealing a package of contraband from the courthouse handrail. He was in custody at the time and being transported to court for a child custody hearing. Sgt. Benson adds that Brian Lee Shrader was arrested on Aug. 28 after being caught by narcotics agents while placing a package of contraband on the same handrail at the courthouse. His alleged plan was to get it to the next group of inmates headed for court so that it could be smuggled into the jail. Christopher Welch, who was with Shrader, was also arrested for being in possession of a controlled substance.

Benson notes that the sheriff’s office holds a zero tolerance policy on contraband in the jail and courthouse and that anyone who sees anything suspicious in these areas is encouraged to report it immediately by calling 209 533-5815.