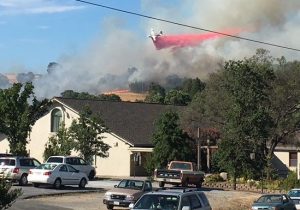 Update 6:45 p.m.: Cal Fire spokesperson Emily Kilgore reports the flames forward progress has been stopped. She adds, “I expect that there is still going to be some extended mop up. Whether it goes throughout the night or just into t he night that’s unclear right now.”

Update at 6:30 p.m.: Firefighters are getting a handle on the vegetation fire burning in San Andreas along the 400 block of Gold Strike Road behind Calaveras Elementary School. Cal Fire spokesperson Emily Kilgore reports crews have reached 30 percent containment and the acreage remains at 15. All aircraft have been called off the scene. Gold Strike Road has reopened to traffic.

Update 6 p.m.: Cal Fire spokesperson Lindy Shoff reports the fire is 15 acres and crews are making progress as some resources have been called off the scene. Gold Strike Road remains closed from Hwy 49 to Lewis Street.

Update 5:30 p.m.: The CHP reports Cal Fire has requested Gold Strike Road traffic be directed by the CHP closing the road from Hwy 49 to Lewis Street.

Original 5:23 p.m.: San Andreas, CA — Firefighters are on the scene of a 5 to 10 acre fire in San Andreas. The flames broke out on the 400 block of Gold Strike Road near Cemetery and Neilsen roads, behind San Andreas Elementary School. Cal Fire spokesperson Lindy Shoff reports the flames are moving at a moderate rate of spread. No structures are threatened at this time.

Thanks to community news partner Sandy Rainey, Joel Metzger and Bryan Root for sending in the photos and video.